You are here: Home / About / Pathways to Harrow

Good news. You can now buy the books and DVD at our online store right here. 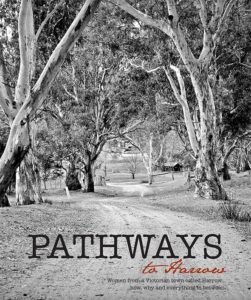 The Harrow Bush Nursing Centre has been providing vital bush nursing services to Harrow and surrounding communities for over 100 years.  It has stood as a beacon to the community through times of fire, drought, flood and times of bounty.  People walk through the doors every day and they bring their stories with them; their journey which is part of their identity.  We asked the question; “why did you come to Harrow and why did you stay?”  These questions are worth being explored and indeed…answered. In 2012, staff members at the Harrow Bush Nursing Centre were discussing over lunch the reasons why people came and stayed in Harrow.  Out of this came the idea to celebrate the various stories in our community from women and help dispel any notion, that life out here in Harrow would be anything but boring and lonely.  We decided to connect the book launch with International Day of Rural Women. 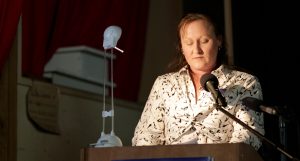 “Pathways to Harrow” had begun!

[dropcap]T[/dropcap]his project presented the journeys of 25 very different women who have moved to the rural hamlet of Harrow; claimed as Victoria’s oldest inland town situated in the West Wimmera.  Each woman presented their unique story which will encompass their lives before and after moving to Harrow, intertwined with a need for health, love and happiness. (Pic: Barb Brown tells her story)

Why we do this…

It is envisaged that this project can promote and encourage the idea of relocating to a rural community such as Harrow and the benefits of making such a decision.  We also do this hoping it may bridge gaps between cultural, ethnic and linguistic diversity amongst women in our community, not only in the district of Harrow but also to the observer or reader of the book. We hope the journeys bring understanding and appreciation of diversity amongst the women of Harrow.

Each year, we extended an invitation to members of the community to nominate a person to be involved in Pathways to Harrow as a participant.

The criteria are: 2 senior women, 2 younger women and a woman that has a CALD (culturally and linguistically diverse) background.  All women must be members of the Harrow Bush Nursing Centre.

We worked closely with the 5 women and our volunteer editor/photographer to ensure they are happy with their final written journey and all other written material.  We also assist the participants in preparing a digital presentation that complements their oral presentation of their journey to Harrow.

The women who took part in this project are volunteering their time and participation.  Our Editor/Photographer also a volunteered as well as the members of our Committee of Management who also give their time to assisting in the book launch.

The booklets are colour printed and bound by a local printer.  A copy of each booklet was sent to national, state and local libraries, The Prime Minister’s Office, local members of parliament and Ministers of Women’s and Rural Affairs.

The booklets are available for purchase all year round through the Harrow Bush Nursing Centre, a local museum, local information centre and community craft shop and café.  At the end of 5 years, a hard cover, colour book was printed that includes the entire collection – 25 stories. 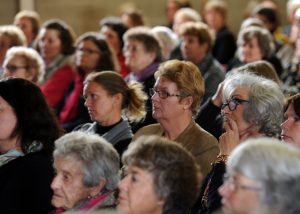 On 15th October every year, the booklet was officially launched at a Chicken and Champagne luncheon held in Harrow. The women each presented a 20 minute talk about their journey, using digital technology and a podium, to the audience of paid ticket holders.  The number of patrons each year since launch sold out in excess of 200 patrons. (Pic: Pathways to Harrow 2014. Jacinta Grant, Beryl Grant and Rosemary Shrive listen to the speakers.)

In 2012, we invited the following women to present their Pathways to Harrow: